How was this great match made?

“Presume through Alberto [Conti] you will touch base with the other JWST folks looking at IFU data visualization like Tracy Beck, Massimo (our Acting Head of the JWST[?].”

Three days later, on a trip to Baltimore from Boston, Goodman was in Mountain’s office at STScI, where he showed her his copy of  her “Principles of High-Dimensional Data Visualization in Astronomy.”  Conti, then a NASA “Innovation Scientist,”  had shared Goodman’s draft with Mountain, knowing how relevant the “principles” in the paper could be for JWST data in the future.   To Goodman’s complete surprise, about 5 minutes into the conversation, Mountain offered Goodman (who was not actively seeking funding at the time) “something like a million dollars” to make the “glue” software described in the draft “real enough to use.”

Why were these astronomers so interested in glue + JWST?

The Webb telescope doesn’t just take images.  It can take a spectrum, breaking up light into constituent colors, at many many positions within an image at once, using a device called an “Integral Field Unit.”  The resulting data format, which has “x-y” positions on the sky, plus a “z” axis that corresponds to wavelength, is called a “spectral line image cube.”  Astronomers trained to use radio telescopes, including Goodman, have used such cubes for decades.   Goodman and her colleagues designed glue to exploit both high-dimensional data (e.g. cubes) and the principles of “exploratory data analysis” shown in glue’s logo.   (The red-highlighted points and regions in the glue logo are all coordinated, in that salient values selected in any open display of data are also selected, live, in others.)

What’s glue done in a decade?

Now, ten years later, the glue software environment is a robust open-source ecosystem that underlies all of Jdaviz, the web-based analysis tools being provided to scientists as the way to analyze JWST data. Thanks to initial and ongoing support from the NASA-JWST program, as well as from the National Science Foundation and the Moore Foundation, the glue exploratory data analysis tools are now are now used in many astronomical investigations, in genomics, and in many other contexts.

Recent astronomy-related discoveries made using glue include the discovery of the Radcliffe Wave and the Perseus-Taurus Supershell, and the star-forming significance of the Local Bubble around the Sun.  glue has also been used to produce the first augmented reality figures published in a major astronomy journal.

glue is also used to teach data science.  At the high-school/community college/college level, it’s a key element of the infrastructure powering the “Cosmic Data Stories” project of NASA’s Science Activation Program.  And, for more advanced data scientists, glue is being used to train data scientists in astronomy, for example in the “Seeing More of the Universe” YouTube series created by Alyssa Goodman for NSFs Rubin Data Science Fellows program.

Jdaviz offers four special packages intended for different specific purposes.  All of the packages use JupyterNotebook, JupyterLab, glue, and many Astropy functions to accomplish their goals. The “Glupyter Framework Overview” page on the Jdaviz website gives a good summary of how glue-jupyter (also called “glupyter”) is used, and can be extended, within the jdaviz environment.

The four packages that comprise Jdaviz are called “Imviz,” “Cubeviz,” “Mosviz,” and “Specviz,” and super-short descriptions of each, from the Jdaviz website, are shown below.   For power users’ reference, glue outside of Jdaviz can integrate functionality across all of the specific tasks accomplished in these four tools, simultaneously.  See the glue website or these online demo and training videos for more on how to use glue in its most flexible forms.

Imviz
Imviz is a tool for visualization and analysis of 2D astronomical images. It incorporates visualization tools with analysis capabilities, such as Astropy regions and photutils packages.

Mosviz
Mosviz is a quick-look analysis and visualization tool for multi-object spectroscopy (MOS). It is designed to work with pipeline output: spectra and associated images, or just with spectra.

Specviz
Specviz is a tool for visualization and quick-look analysis of 1D astronomical spectra. It incorporates visualization tools with analysis capabilities, such as Astropy regions and specutils packages. Specviz … supports flexible spectral unit conversions, custom plotting attributes, interactive selections, multiple plots, and other features. Specviz notably includes a measurement tool for spectral lines which enables the user, with a few mouse actions, to perform and record measurements. It has a model fitting capability that enables the user to create simple (e.g., single Gaussian) or multi-component models (e.g., multiple Gaussians for emission and absorption lines in addition to regions of flat continua).

An excerpt from “Visualizing Science: Illustration and Beyond” 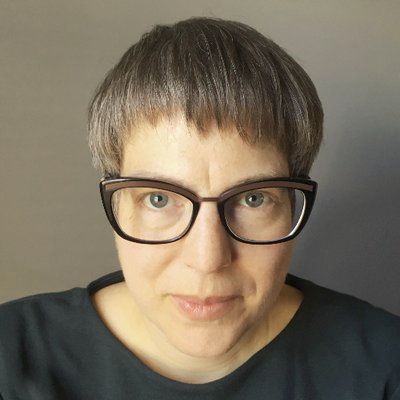 Jen is a senior graphics editor with the Scientific American.

The Sciviz Continuum: Figurative to Abstract

I tend to think of information graphics as a continuum, with figurative representations at one end and abstract representations on the other (see the first Figure below). In the world of science visualization, you could argue that the full continuum can also be referred to as data visualizations. After all, essentially all of our work is rooted in data collection at some stage in the process: from bone length measurements in dinosaur reconstructions, to meticulously documented laboratory experiments that build up to a more complete understanding of processes like photosynthesis, to representations of mathematical expressions (like Feynman diagrams), to straight-up plotting of the raw data itself, in chart form. 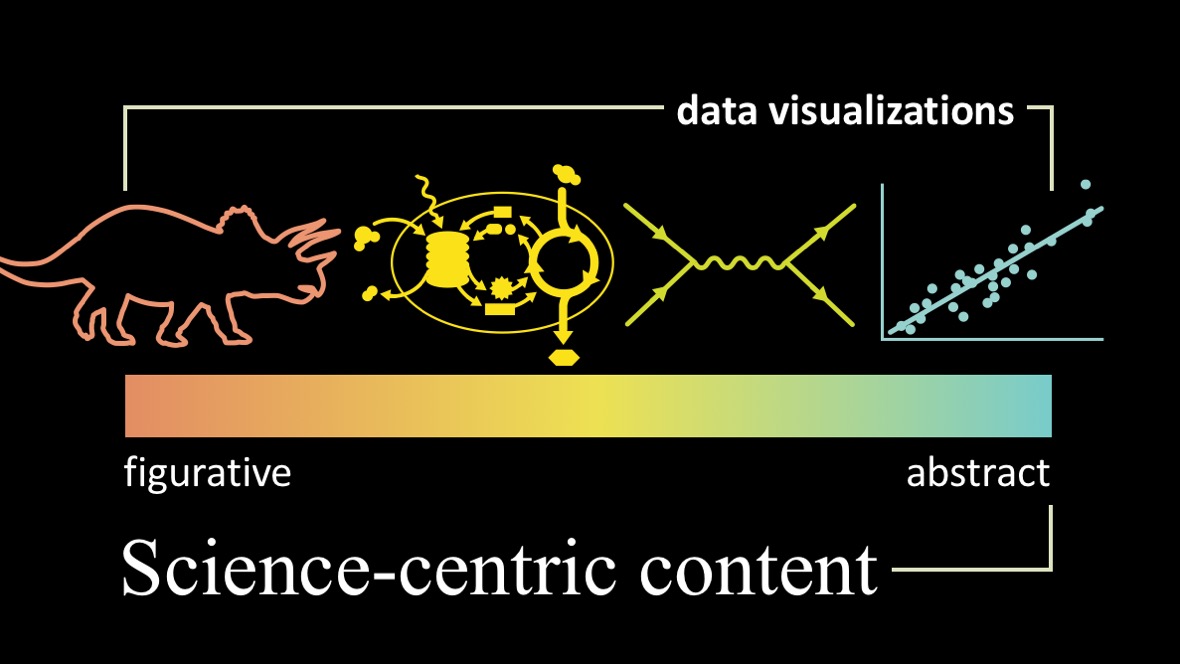 Outside of the world of science visualization, it may be more useful to think of the continuum like this: 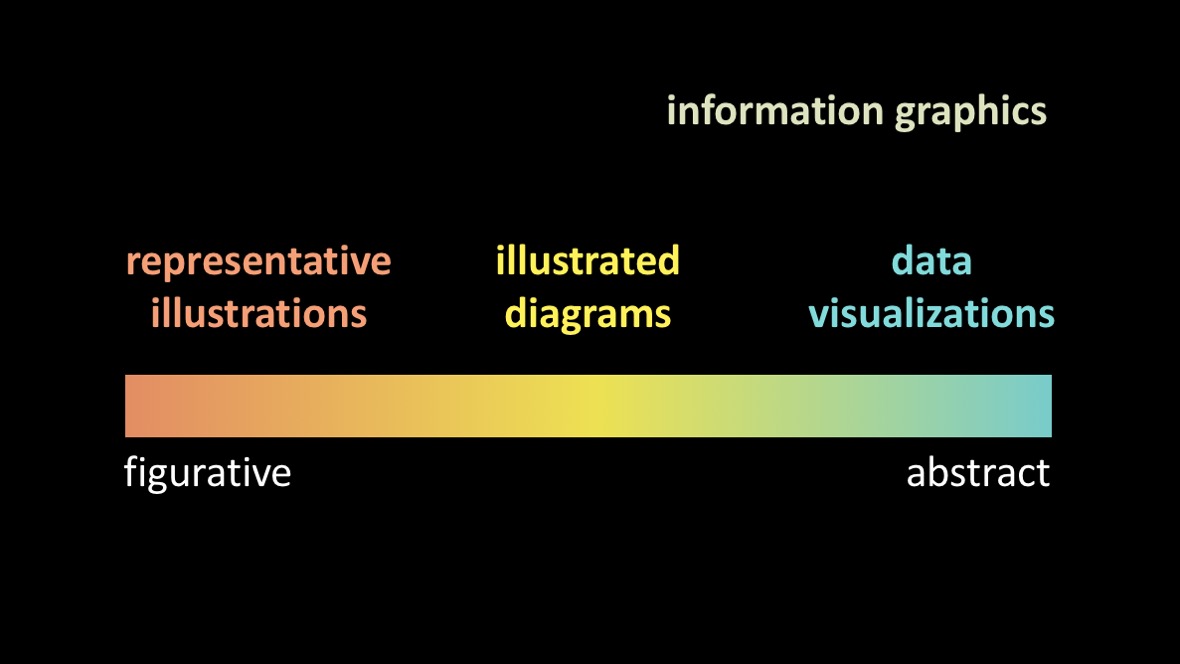 When I flip through old issues of Scientific American, it strikes me that many artists worked across the full spectrum. But as a graphics editor at the magazine now, I find myself maintaining discrete freelance pools for each of the different points along the continuum. 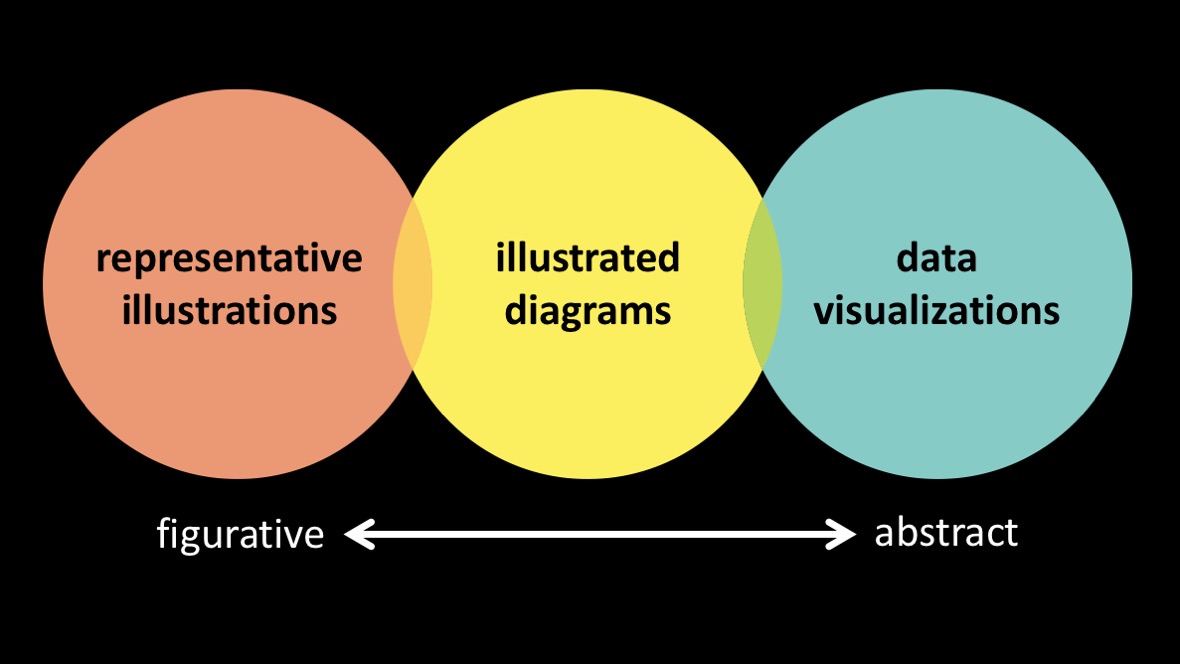 Perhaps this is an artifact of my own biases, but it occurs to me that this increased specialization may also be in part due to the shifting tools of each of these areas. When the primary tool for developing representative illustrations, explanatory diagrams, and data visualizations for print magazines was pen and ink, an artist could become a master at pen and ink, then explore different methods of problem solving in each of these areas.

Since desktop publishing became ubiquitous and digital rendering tools diversified and became more widely available, it seems to me that the simple act of choosing a primary tool starts to define the edges of the artist’s scope. As an art director, I find myself specifically looking for 3D artists to build physical objects; folks who hone in on composition and the flow of information by iterating with tools like Adobe Illustrator for explanatory diagrams; and data designers that build solutions with code for visualizing large datasets.

Each of these tools, mediums, styles and genres take lots of time to master, and tend to favor certain portions of the continuum. Many of the conferences I attend and communities that I engage with seem to reinforce these divisions, by focusing on the tools. And it seems that artists that span more than one of these orbs are harder and harder to find.

Perhaps that way of thinking about things is a bit overly dramatic. The reality is probably much more like this. 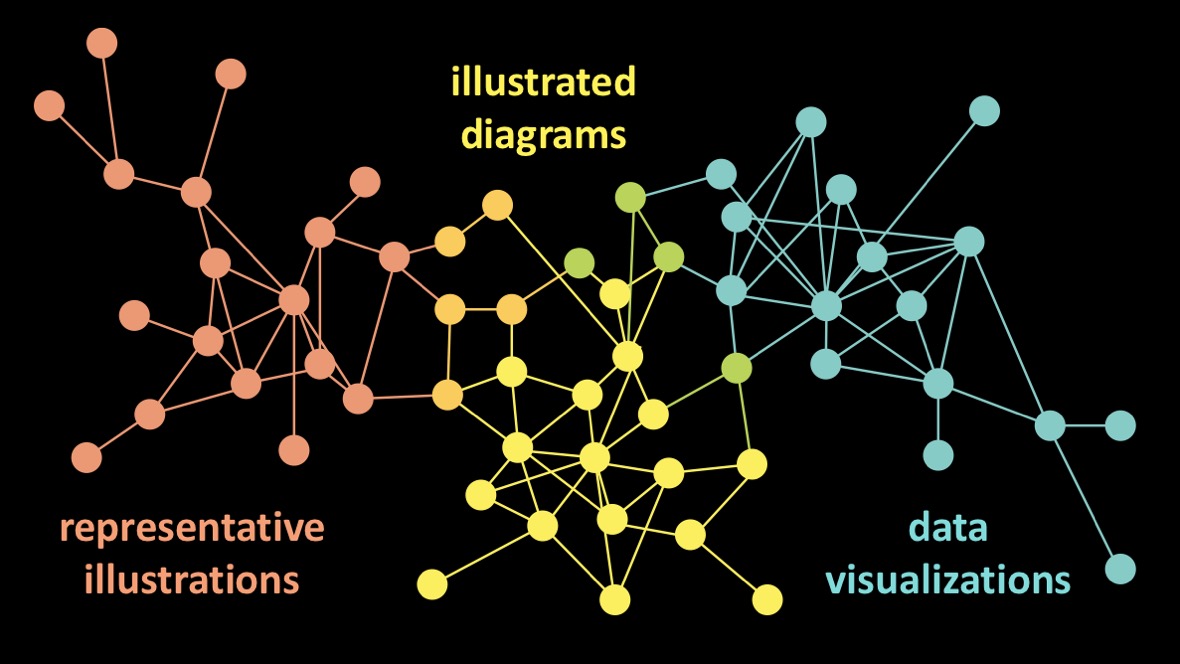 And perhaps this is a completely natural and fine state to be in—particularly since the primary tools for these different sub-disciplines have bifurcated over time. And perhaps there isn’t value in trying to force discrete clusters to reconnect. 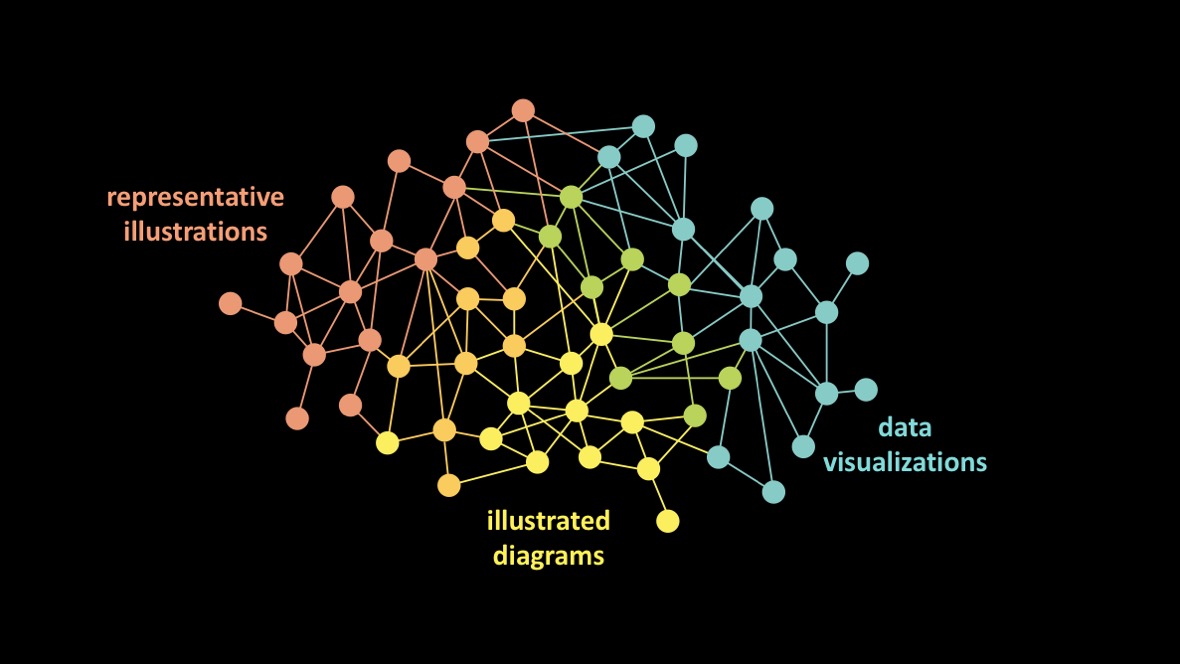 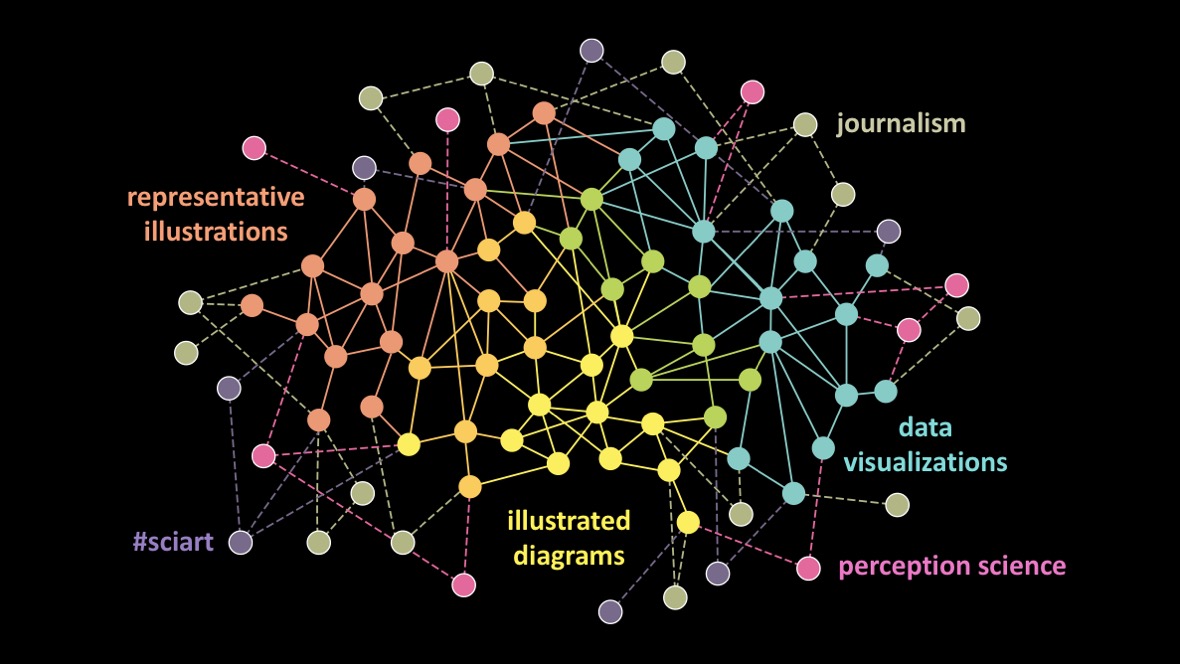 For the full post, see Visualizing Science: Illustration and Beyond.

Included in Stephen Few’s very interesting visualization blog (perceptual edge) is the provocatively titled “Save the Pies for Dessert” post.   Pie charts are notoriously bad for perceptually judging magnitude. Here is an annotated excerpt from Few’s post, giving just one example of how hard it can be to judge scale using pie charts… 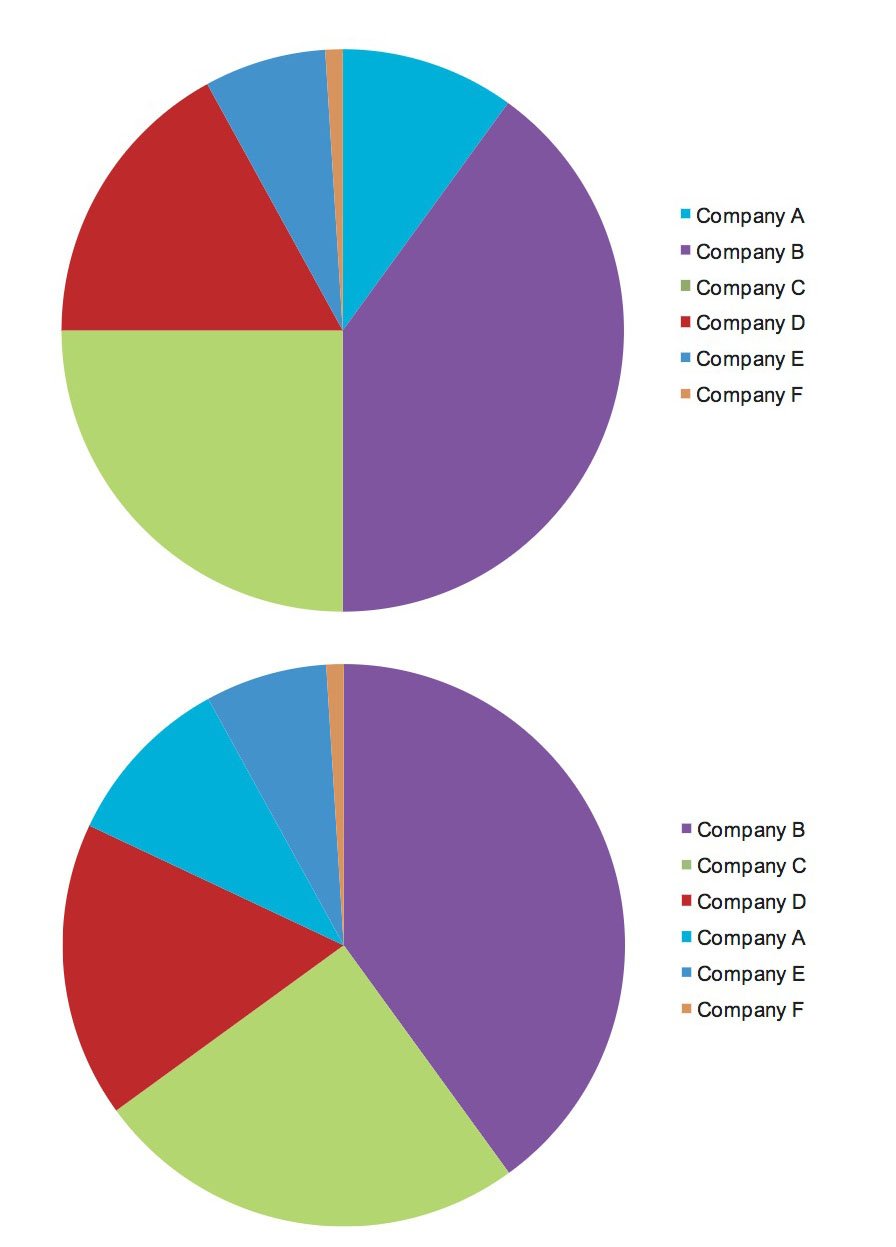 Not everyone hates pie charts, though…for example, here is a blog post from “Junk Charts” on the downside of discouraging pie charts.

Bonus: An amusing pie chart which shows the shadow illusion featured in the Categories question is this fascinating little image. Once you see the pyramid, you cannot unsee it: 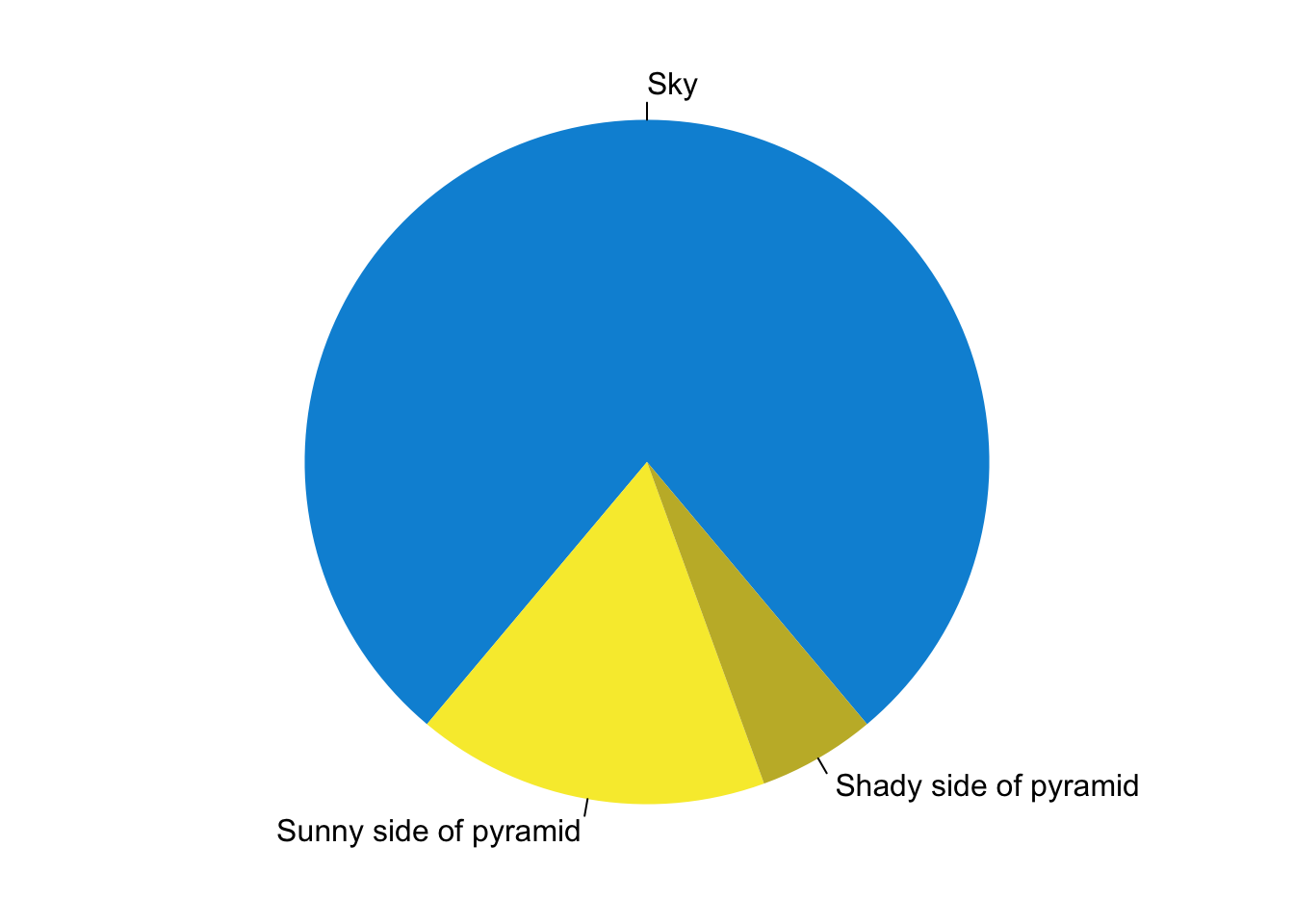 I did not manage to identify the original maker of this -sort of- meme at this point, if you know, please tell me in the comments. Image above is copied from Rebecca Barter here: http://www.rebeccabarter.com/blog/2015-07-23-pie/

You may select any of the categories below to find content of interest that addresses multiple questions.